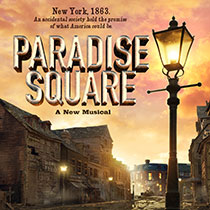 As soon as the overture to the new musical “Paradise Square” started up, the audience began cheering. It was the first show with live actors onstage at Chicago’s James M. Nederlander Theatre in nearly two years.

I was in Chicago where the show was having its tryout run in November, ahead

of its expected late-February opening on Broadway.

“Paradise Square,” with a new book and score, will be a rarity this season. It’s an

original musical – not a stage version of an existing movie property, like “Aladdin,” nor

a jukebox musical based on a singer’s work such as “Tina: The Tina Turner Musical.”

I was especially excited to see the work of lead choreographer Bill T. Jones, a Tony-winning veteran of two Broadway shows, as well as the director of a contemporary dance company. I was intrigued by the big intentions of the musical: lots of spectacle, a large cast, and the promise of a good story. What I did not expect, as I watched the Civil War saga unfold, was the relevance of the subject matter, despite reaching back more than 150 years in American history.

The musical, set in 1863 in the gritty Five Points area of New York, follows the fortunes of two groups – a community of free Black people and an enclave of Irish immigrants. The people work alongside each other, gather at the Paradise Square saloon, and occasionally intermarry. These marriages across racial lines are only two components in a complicated plot that involves abolitionists, a newly arrived Irish immigrant, and a man who had escaped from slavery.

To grasp more of the history behind “Paradise Square,” I spoke by phone with director Moisés Kaufman and associate choreographer Gelan Lambert. I was also able to connect by email with Joaquina Kalukango, who plays the central character, Nelly, owner of the saloon.

“One of the most beautiful things about this story is that, way before we think of it, Americans had tried to come together,” Mr. Kaufman says. “It was the precursor of our desire to live in a community.”

The interwoven plotlines are brought to life by a splendid cast of 38 performers who showcase dance from both African and Irish traditions. “The dancing helps tell the story,” Mr. Kaufman says.

The choreography of Mr. Jones involves a fusion of cultural inspirations – from the rituals that enslaved Africans brought to America to Irish step dancing.

Garrett Coleman and Jason Oremus play the lead Irish roles and created the Irish dancing on stage. We see the two groups gradually borrow from each other: the Irish performers bend and thrust their bodies in freer movements; the Black dancers find ways to vary their footwork from stomping to quicker, lighter stepping – a vibrant integration of different rhythms and a melding of one tradition into another that ultimately would lead to the new American form called tap.

“The people who came [to America] were seeing the dances of the others they met,” says Mr. Lambert. “I do believe they appropriated styles and they shared by watching and looking. ‘Appropriation’ means taking something and making it your own,” he adds. A dance-off, in which an escaped enslaved man and a young Irish immigrant compete to win a large sum of money, is a highlight of “Paradise Square.”

But beyond the roistering and friendly competition at Nelly’s tavern, a storm is brewing. A white politician views Nelly’s establishment as the place where white and Black people can come together and he sets out to destroy it, in fear of the combined power of the

two groups. “The African Americans and the Irish immigrants were considered

dirt by the upper classes,” observes Mr. Kaufman, the director.

The wily politician successfully exploits the frustration and anger of a returning soldier, an Irish immigrant who can’t find work, by convincing him that free Black men have taken his job. This conflict, set against the background of city-wide protests against a draft order by President Abraham Lincoln, touches off riots in Five Points.

The parallels to our own time could not be clearer, despite being clothed in colorful period costumes and scenery. The musical underscores the point that, as in mid-19th century New York, the issues of racial injustice, class conflict, the plight of immigrants, and the struggle for equality continue to roil society. Like the blockbuster “Hamilton,” it reaches back into history to illuminate key areas where America has fallen short of its promise.

The music was composed by Jason Howland, with additions to the score by Larry Kirwan, the originator of the work, which began its life as the 2012 musical “Hard Times.” Mr. Howland incorporates elements of Civil War-era tunes by Stephen Foster such as “Oh! Susanna” and “Camptown Races,” along with Irish dance music, patriotic anthems, and soaring power ballads. Foster, who lived for a time in Five Points, is also a character in the show.

The two outstanding numbers are the dance competition and Nelly’s song after the riots are over, the scorching “Let It Burn” (sung by the powerfully voiced and expressive Ms. Kalukango). I found “Paradise Square” to be an enthralling spectacle of American history even though critical reactions in Chicago were mixed. Some reviewers suggested that the musical needs more work to sort out its cat’s cradle of plotlines. I agree, but I still think the show is a winner, in the manner of “Ragtime,” another period musical that was characterized by an uprising in the face of inequality and prejudice.

Whatever changes may occur to the musical in its transfer to Broadway, one thing that won’t be diminished is the energy and urgency of its performances, especially that of Ms. Kalukango. Her Nelly is the moral and emotional center around which “Paradise Square” revolves. I asked her via email if there’s a happy ending to her character’s story.

“Happy would not be the word I would use,” she wrote in reply. “What I will say is that her future is full of possibilities. Nelly is not the type to be defeated for too long, so the end is a reset for her. To start anew with a new dream.”

Iris Fanger is an arts journalist who writes on dance and theater.“Paradise Square” is

expected to begin previews at the Barrymore Theatre in New York on Feb. 22 and is slated to open on March 20. Tickets are on sale through Nov. 27, 2022.

RAIN: A TRIBUTE TO THE BEATLES coming to Huntington, WV