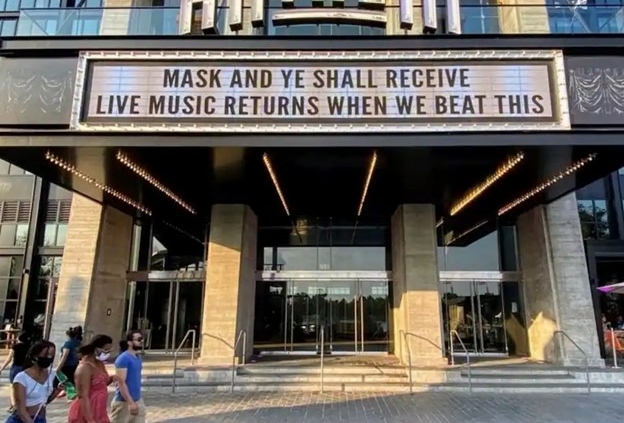 The past few months have been dire for Robin Sokoloff, founder and chief executive of Town Stages, a 10,000-square-foot arts space and bar in Manhattan’s Tribeca shuttered for a year by the coronavirus. Having spent the small government payroll loan she received last year on staff salaries — and now being forced to give up her own apartment — Sokoloff faces bleaker days still.

“I am sitting here surrounded by boxes, packing up, and the future is dark,” she said in a telephone interview. “Between February and now, I’ve watched so many of my peers have no choice but to close their gates and hand in their keys.”

For Sokoloff and thousands of other operators of music clubs, theaters and other live-performance venues across the country, federal help was expected to have arrived by now: In December, President Donald Trump signed into law an omnibus relief bill that included $15 billion in grants for ailing entertainment spaces and promoters in the largest public rescue of the arts in U.S. history.

A far longer than expected build-out of the application process by the Small Business Administration — which only had its new head, Isabel Guzman, confirmed by the Senate last week — has meant serious delays in the disbursement of funds. And a buildup of anxiety, debt and the prospect of permanent closure for arts entrepreneurs.

“We had hoped the money would start flowing by the middle of February,” said Audrey Fix Schaefer, a spokeswoman for the National Independent Venue Association, a 3,000-member organization formed last year that successfully lobbied for the relief package. “Every day that goes by is another day without revenue. I’m talking to people who are draining their 401(k)s.”

The SBA announced Friday that applications for the aid under the so-called Shuttered Venue Operators Grant program will open April 8. The timetable for handing out the SVOG grants — for which the recently enacted $1.9 trillion American Rescue Plan kicked in another $1.1 billion — remains unclear. The SBA will host a national informational webinar on the process on March 30.

A financial-aid program of this scale for an industry with which the government is only marginally familiar poses some unusual logistical challenges for an agency such as the SBA, according to those with knowledge of the process. The massive stimulus plan that President Biden signed into law on March 11 included funds to hire additional SBA staffers to handle coronavirus relief and the enormous pent-up demand for help. Schaefer said 20,000 potential applicants attended an introductory SVOG webinar in January, with an additional 15,000 on the waiting list.

Privately, aides to some members of Congress described the delay as “concerning.” But aides to Sen. John Cornyn (R-Tex.), who, with Sen. Amy Klobuchar (D-Minn.), sponsored the original bill that led to the SBA grants, said their office “continues to communicate with the SBA about implementation. Senator Cornyn wants this grant program to open for applications as soon as possible so venues can receive relief.”

“So much of what the federal government, particularly the SBA, have done during the crisis is completely unprecedented,” said Sandy Baruah, who led the SBA under President George W. Bush and is now chief executive of the Detroit Regional Chamber. “The federal government is very, very much a blunt instrument, and in times of crisis and times of not crisis, a lot of people, including members of Congress, want federal agencies to operate as a scalpel. And it was never designed for that, especially if you do it overnight.”

SBA officials say they are getting there. “Since the law passed, the SBA has been building the SVOG program from the ground up and working expeditiously to ensure all the mechanisms required by law and the application/awarding process, as well as front-end protections, are in place,” said SBA spokeswoman Andrea Roebker in an email.

The bill that Klobuchar and Cornyn introduced last June — then called the “Save Our Stages” legislation — originally was designed to help for-profit nightclubs and other music venues that were shut down as the coronavirus spread. During the ensuing months, other beneficiaries were added, including commercial Broadway and nonprofit regional theaters, movie theaters, museums and zoos. It provides for grants of up to $10 million, in a formula based on a venue’s earned income, and capping the disbursements at 45 percent of its 2019 gross revenue.

Initially, the legislation precluded venues that received forgivable loans through the second round of another federal initiative, the Payroll Protection Program, from getting SVOG funds. That was amended in the American Rescue Plan, so groups could qualify for the SVOG grants, minus the amount they received through the PPP.

The lag between the laws’ enactments and seeing a check has led to increased anguish for some arts organizations. Risa Shoup, interim executive director of off-Broadway’s Alliance of Resident Theatres/New York, says the run-up to relief has been “chaotic. We’re told you’re eligible for SOS or PPP2 — ‘It’s going to be open, you better get ready to apply’ — and nothing happens. You’re thinking about how you are going to pay your rent. And nothing.”

Several weeks of waiting in vain, in fact, can spell the end for a venue surviving month to month. “The difference between February and April for me and so many,” Sokoloff said, “is lenders are calling in their debts, credit’s getting destroyed, lawyer fees are through the roof and folks just can’t keep affording them.”

Fortuna Sung and Matthew Garrison launched the ShapeShifter Lab, a 4,200-square-foot live music and art venue in Brooklyn, in 2012. Since their traditional revenue-generating sources came to a halt last year, they have been live-streaming concerts, hosting recording sessions and accepting donations to keep them afloat.

Still, they said in an interview, their revenue is less than a tenth of what it was, their lease is up this spring and the landlord is raising their rent.

“We are almost, at this point, drowning,” Sung said.

ShapeShifter received a small disaster grant of $7,000 that it spent “in a week,” Garrison said, as well as a 30-year SBA loan. If an SVOG grant had been in their bank account by now, Garrison and Sung said, they would have had leverage to negotiate with their landlord.

“Our idea was to negotiate a lease that maybe would have been six months at a time, so then that money would have helped us sustain for that period of time,” Garrison said. “Not getting those funds in a timely manner has destroyed us.”

Because these cookies are strictly necessary to deliver the website, refuseing them will have impact how our site functions. You always can block or delete cookies by changing your browser settings and force blocking all cookies on this website. But this will always prompt you to accept/refuse cookies when revisiting our site.