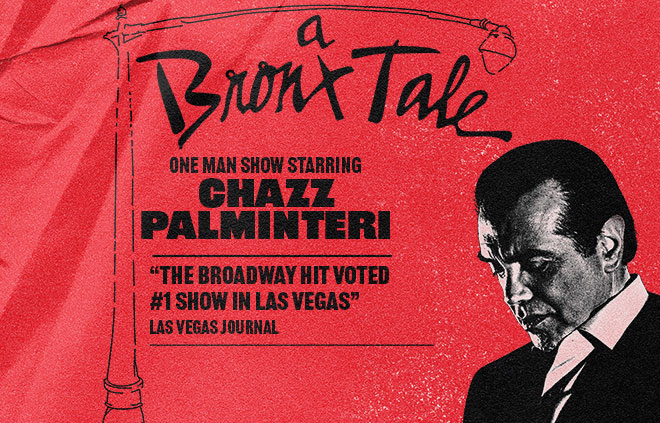 The Pittsburgh Cultural Trust announces single tickets will go on sale on Friday, May 20, 2022, at 10:00 a.m.ET, for Red Tail Live Presents A BRONX TALE: One Man Show starring Chazz Palminteri featuring performances on November 11 and 12, 2022, at 7:30 p.m., at the Byham Theater, 101 Sixth Street, Pittsburgh, PA.

For the most up to date information about the Pittsburgh Cultural Trust’s Know Before You Go: Health and Safety Protocols, visit: TrustArts.org/Welcome.

Bronx-born and raised, Chazz Palminteri wrote A Bronx Tale in 1988.  The powerful one-man stage play depicted his bruising childhood which included witnessing a gangland killing when he was nine years old.  Palminteri played 18 characters and brought them all to life in his autobiographical play.  His friends, enemies and family came alive on stage.  Hollywood Studios went crazy after seeing it and offered him millions of dollars to turn it into a major movie.  There was one catch… They wanted to put a star in the role of Sonny and someone else to write the screenplay.  With $200 dollars in the bank…Palminteri said No… he would hold out and wait. He wanted to play Sonny and write the screenplay.  Then, one night Palminteri walked into his dressing room and sitting there was Robert De Niro who just saw the show… He said it was the greatest one-man show he’s ever seen. Robert DeNiro gave Palminteri the chance he was waiting for… And as they say in Hollywood the rest is history.

In 2019, A BRONX TALE Broadway’s New Hit Musical national tour was presented by the Pittsburgh Cultural Trust, as part of the PNC Broadway in Pittsburgh 2019-2020 season, November 19-24, 2019, at the Benedum Center.

‘The Kite Runner’ Is Coming to Broadway

LAZER INVAZION LIVE! Premieres this Saturday (6.4.22) at The Frida in Santa...
Scroll to top